On Tuesday, the federal government of Canada approved of Enbridge Inc.’s Northern Gateway pipeline proposal. If you are not very familiar with what this proposal entails, here is a summary: – The Northern Gateway pipeline project if undertaken, will reportedly generate $300 billion to Canada’s GDP at the point of the project’s completion. – The pipelines if finally put in place, will constantly transfer oil from Bruderheim in Alberta, to Kitimat in British Columbia, for a while. The federal government approved of the proposal and have given it a ‘go ahead’ as long as some conditions are met. Those conditions being that: – the project must meet the 209 conditions suggested by the National Energy Board – B.C.’s Aboriginal community gives its opinion on the project These conditions are yet to be met. You might be wondering, “Why all these procedures?” Well, research shows that about 30% of the people living in the North Coast of B.C., where Kitimat is located, depend on the marine industry for jobs. Also, if you are Canadian or if you have ever been to B.C., you will know that the province is surrounded by lots of water and vegetation. A beautiful province. It does not come as a surprise that the province attracts tourists. In the North Coast of B.C. as is probably the case in other parts of B.C., people spend time at the waters for recreation. Research shows that residents get food from the waters too – that is cost-effective. 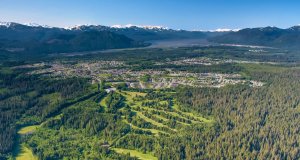 Now, there are talks of placing oil-carrying pipelines in the Kitimat waters for economic gain. However, what happens if the Northern Gateway project gets executed and an oil spill occurs? No other part of the country is bound to suffer like B.C. . The vibrant waters of the North Coast of the province will be highly polluted, jobs will be lost, tourism may be affected and the cost of living in the area will increase. A majority of British Columbians have opposed the Northern Gateway project including many of B.C.’s First Nations peoples. The government of British Columbia is yet to give the proposal a ‘Yes’. It has set out five conditions – http://ow.ly/i/5X3lX that must all be met before the project can be executed. However, with conditions or no conditions, the Northern Gateway pipeline proposal as hard as it is to resist, is not a project that should be given much positive consideration for execution. If the Northern Gateway pipeline project gets underway and something goes wrong, British Columbia’s environment and economy will be affected badly. Every Canadian wants our economy to keep getting better and better, but definitely not at the expense of so many important factors. To the Canadian public, our politicians and to all British Columbians, let us not allow the Kitimat environment and the environment of British Columbians as a whole, to be put at risk. Let us say ‘No’ to this Enbridge proposal.