Chiamaka and Blurred Creations are getting noticed! 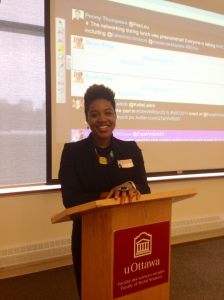 Chiamaka was invited by the University of Ottawa’s Equal Voice branch to host and moderate the team’s annual She Will Run conference. The event which was aimed at encouraging young women to develop interest in politics and consider running for office in the future, took place on March 7, 2015 and attracted about 50 people. Chiamaka moderated conversations between the audience and the guest speakers – two of whom are female politicians. The minister of labour and the status of women – Hon. Kellie Leitch, the president of the Ontario Liberal Women’s Commission – Lynne Steele and a candidate of the Green Party of Canada – Lorraine Rekmans were the guest speakers. In alignment with her personal mandates, Chiamaka’s role at the event was to be non-partisan and she had suggested the idea of having interactive sessions between the audience and these political figures. 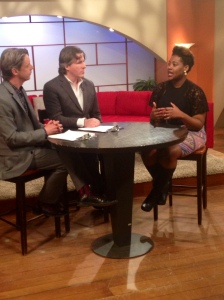 Chiamaka was invited on one of Ottawa’s most renowned news shows – Daytime Ottawa, to speak on her passion for social justice and on current human rights violation issues. Chiamaka shed light on the  marginalization of Indigenous people in Canada and briefly touched on police brutality in the United States.