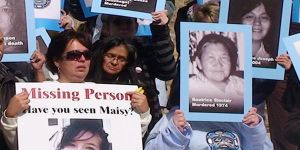 A year ago, the Royal Canadian Mounted Police (RCMP) released a report which states that between 1980 and 2012, there had been 1181 missing and murdered Aboriginal women. According to the report, a striking majority (1017) of the women in that category were murdered. The numbers continue to rise. Last year, 15 year old Tina Fontaine’s body was found in the Red River. The body had been wrapped in a plastic bag before it was dumped. In November of that same year (2014), Rinelle Harper was sexually assaulted, beaten and dumped in the Assiniboine River. Harper survived.

The indignity in the way Indigenous women in Canada are treated did not start just recently. Colonization was the genesis of these atrocities. Indigenous people were the first on Canadian soil but they began to face marginalization, violence and colonization when European settlers started to emerge. Indigenous women were seen to be of little or no worth, they were sexually assaulted and used for labour. Patriachy was infused into the Indigenous culture as a result of the Christian, European homogenization of the society that was taking place at that time of colonization in Canada. There was the establishment of the residential school system by the government in the 19th century, in an attempt to cleanse Aboriginal children of their culture and enable them assimilate into the mainstream culture. Children were forcefully taken to residential schools where they were not allowed to speak their language and lots of sexual, physical and emotional abuse went on in these schools. The residential school system ended in 1996 – not a long time ago.

I have been in the middle on conversations on Aboriginal issues where someone will chip in and state sympathetically that their culture is the main issue. So you see, the effects of colonization can stick like hard glue. The culture of Indigenous people is not the problem and it is unfair to say so. Rather, the problem is that Natives have long been forced to assimilate into the dominant culture and their commitment to the culture of their ancestors has resulted in dire consequences such as the susceptibility of the women to sexual assault and murder.

The eye-opening RCMP report which was mentioned earlier, focused on the year 1980 through to 2012. Before 1980, such issues were already taking place. In 1971, Helen Betty Osborne was sexually assaulted and murdered for refusing to follow a group of men to party. In 2014, there were the cases of Fontaine and Harper. So Canada, how many more Stolen Sisters before we get our act together? How many more Stolen Sisters before the government of the day takes action to reduce the proneness of Indigenous women to violence?

One thought on “How many Stolen Sisters?”